Many people know Michigan for companies such as Kellogs and Better Made, but we thought you might be surprised to know how many other brands are from the Great Lakes State!

Germack Pistachio Co. are the oldest roaster of pistachio nuts in the US.

John and Frank Germack (Sr.) came to America through New York’s Ellis Island in 1912 at the ages of 12 and 7, respectively. Longing for a taste of their homeland, older brother John started a business  in Brooklyn, then in New York City to sell traditional food imports to the growing population of Turkish,  Greek and Eastern Europeans making their way to the US. Some of their products included olives and olive oil, spices and various nuts. Pistachio nuts, extremely costly and a delicacy in the Mediterranean, were new to many in the US. Frank joined the company, and the two brothers sought other locations to grow the import business.

Read the Germack Story to learn about the history of Germack. 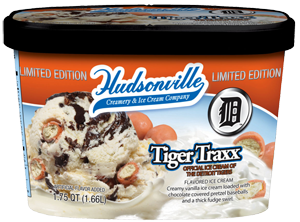 Frank Vlasic moved to America in 1912 to build a better life for his family. Problem was, he made cheese, not pickles, so the success part of the story took a while. After saving every dime from his $2 a day car foundry job, Frank established a creamery business in Detroit.

Gerber started out as home recipes, prepared by the wife of founder Daniel Frank Gerber, when she was asked by their family doctor to specially-formulate grub for their tiny tot.

Not much happens between the creation of the universe and 1907, when Russian immigrant bakers, Ben and Perry Feigenson, begin transforming their frosting flavors into the Faygo we love today.

Read more about the many flavors of Fago

That Detroit-made remedy for all that ails you, Vernors was founded by pharmacist James Vernor in 1866, who brought America’s first ginger ale to the market. The ale is mostly a Michigan-only brand, but can also be found in plenty of Midwest retailers.